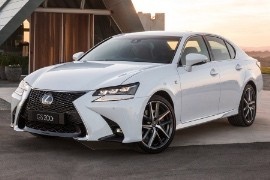 After four years since it launched the fourth generation of the GS, Lexus introduced a facelifted version improving the vehicle in many areas.
The refreshed GS was not just a pretty face on the same old package. It was another step forward in technological achievements, and when it appeared on the market, it was the only premium sports sedan that provided two hybrid powertrains. It also offered a unique, unmistakable design.

It all started at the front with the “Lexus-spindle.” While it looked like a vertical bow-tie strangled in the middle, it offered an aggressive, road-hugging look. New DRLs underlined its three-LED headlamps. Lexus added a new bumper design and new 19”, light-alloy wheels for the F Sport version.

Inside, Lexus installed bucket seats at the front with standard artificial leather upholstery. The carbon-fiber and aluminum trims created a sporty yet elegant interior. It was like a GT vehicle but with four doors. In the back, Lexus offered a choice for either a bench for three or two individual seats separated by a folding armrest. There was enough room for three passengers in the back, but with an uncomfortable position for the middle one.

Under the hood, Lexus offered something for everyone. The base engine was a new, inline-four, turbocharged unit. On the top-spec version, the F-Sport model featured a hybrid powertrain that provided 345 hp. 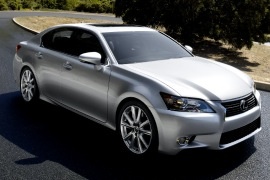 In April 2011, Lexus showed the concept-car LF-Gh at the New York Auto Show.
It was the fourth generation of its mid-range saloon, the GS. The series version was shown had its world premiere at the Pebble Beach Concours d’Elegance in California in August 2011.

Its look is very complicated, with a lot of lines and edges on the front bumper. It looks like it was 3D-printed, not molded. By the fourth generation, Lexus already established itself as a top-quality name in the U.S., and the biggest question was about the drivetrain.

At its debut, the fourth generation model was shown in rear-wheel drive GS 350, powered by a V6 engine mated to a six-speed automatic transmission. Various engine variants followed, including all-wheel-drive systems, all-wheel-steering systems and two hybrid versions. Since it is a luxury vehicle, no manual transmission was offered.

Inside, there is a new infotainment system, with Siri Eyes Free mode from Apple and other hi-tech features were installed in the GS. The sound system is signed by Mark Levinson and promised to transform the cockpit into a concert hall.

The seats are 10-way power assisted as standard and 18-way as an option. Other optional features further include a pre-collision system, Heads-Up Display, blind spot monitor, lane keep assist, and Driver Monitoring System. 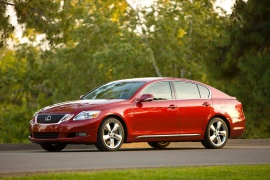 In 2008 Lexus released a minor facelift for its mid-size luxury sports sedan, the GS.
With this occasion the Japanese brand rethought their marketing strategy as well, offering a new 4.6 V8 engine instead of the previous 4.3 and a new hybrid unit named 450h instead of the 350h. The car received a slightly restyled front apron, with lower intake design and a new chrome grille surround. Other features the 2008 GS boasts are the restyled tail lamps and side mirrors as well as new alloy wheels and uprated interior materials. The buttons on the center console were rearranged as well for improved ergonomics. 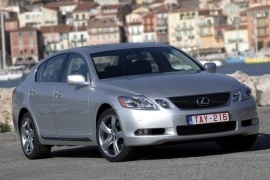 Lexus introduced the third generation of its mid-size sedan GS in 2005, and unlike its predecessors, it was available with a hybrid drivetrain that made it more ecological than before.
While it couldn’t save the glaciers or nature, it was an important step forward in-car technology. In 2005, most carmakers didn’t care too much about hybrid powertrains, but Toyota and its premium brand Lexus pushed harder in that direction. Maybe the design team was not the best-inspired one, but it created a unique shape for the premium Japanese sedan.

Like its predecessor, the 2005 model shared its platform with the Toyota Crown and introduced the L-finesse design philosophy for the Japanese brand. Its front fascia featured a split headlamp system, with the outer ones sporting the turn signals and the low-beam and an inner set for the high-beam function. The cab-rearward design, with thick C-pillars and wide, curved, body panels created a muscular appearance. At the back, the short trunk lid featured a lip spoiler.

Inside, the carmaker designed the cabin for a premium feel. The wood veneers and the comfortable, low-bolstered front seats confirmed that. But the driver had to cope with the multitude of buttons spread or hidden on the dashboard, which made its job more challenging. The carmaker installed a bench profiled for two in the rear, with a tall transmission tunnel that crossed the car from front to back.

Under the hood, the GS was available with a choice of three engines ranged between 231 hp and 283 hp, depending on the market. The hybrid version provided 296 hp on any market. A standard six-speed automatic gearbox sends the power to the rear wheels. 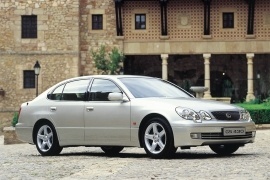 Lexus launched the second generation of the GS in 1997, and three years later, it introduced the facelifted version, with a slightly new design and a bigger engine.
Slowly but surely, Lexus started to climb on the premium car market, and it gathered more and more attention. Its leading position in the reliability index made the car more appealing than before. Even though it lacked some areas compared to the Mercedes-Benz and BMW, the Japanese brand started to get traction.

Giugiaro designed the first generation of the GS, and Akihiro Nagaya drew the lines of the second. He imagined the four-headlights front fascia, which was kept after the facelift, but slightly darkened. The Japanese designer improved the grille with vertical, chromed slats instead of a dark one. The taillights were slightly modified in the back, with the reversing light placed on the bottom instead of the middle part of the lamps.

Inside, Lexus installed more wood on the dash, door panels, and center console. It followed the idea that wood and leather will make the car looks more up-market. There was wood on the steering wheel and on the gear selector as well.

Under the hood, Lexus installed a choice of two engines: a six-cylinder 3.0-liter and a 4.3-liter V8. While the first was carried over from the non-facelifted version, the latter evolved from its predecessor’s former 4.0-liter unit. Both versions were mated to a 5-speed automatic gearbox. For selected markets, the GS430 featured standard Xenon headlamps. 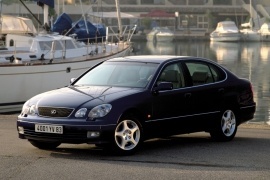 The second generation of the GS aimed directly at the BMW 5-Series, and it had its pluses and minuses.
Lexus tried to make the GS premium sedan with a clear target: the BMW and Mercedes-Benz models. While the Germans offered a wider choice of engines, including performance versions, Lexus was preoccupied with providing a luxurious, quiet interior.

Giorgetto Giugiaro imagined the exterior look baseline, and, strangely, it used mostly curved lines for it. Lexus kept the proportions and the overall style from the first generation and translated it into its younger sibling. An interesting theme with four headlights design was noticed at the front. A big, chromed grille with the Lexus badge in the middle had the mission to attract eyes like honey to bees. The short trunk made the car look more dynamic, but it was smaller than most other vehicles in its segment.

Inside, Lexus nailed it with an exclusive design trend. There were three dials buried deep in the instrument cluster. They could be seen only by the driver. For the other occupants, the carmaker installed an infotainment system with a big screen (offered as an option) on the center stack. Due to its long wheelbase, the GS provided enough room for the rear passengers.

Under the hood, Lexus installed a choice of two engines. The base version featured a 3.0-liter V6 engine, while a 4.0-liter V8 unit powered the full version. Both were paired to a 5-speed automatic gearbox. 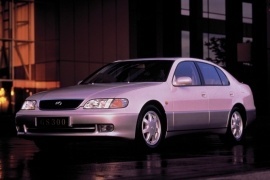 Lexus was on the verge of conquering the U.S. market and introduced the GS range in 1993 based on the 1991 Toyota Aristo.

Toyota didn’t want to take any risks and ordered the design at Italdesign and introduced the Aristo on its home market to see if there were any design or engineering faults. After two years, it introduced the re-badged version of the car on the North-American market as Lexus GS. It was a hit.

Designed to compete against the much-famed BMW 5-Series and Mercedes-Benz E-Class, the GS sported a European styling with narrow, rectangular headlights and a raked front fascia. Its bumper sported a lower grille with one horizontal slat flanked by a pair of fog lights. The chromed trim around the main black grille on the hood gave the car a distinguished look. From its side, the cab-rearward design and the short trunk defined a sporty image.

Inside, the carmaker designed the instrument cluster and the center stack centered around the driver and then adorned the cabin with leather upholstery and wood veneers. But Toyota insisted on keeping the climate controls above the audio unit, even though most customers used the volume knob and the preset radio stations more often than the ventilation buttons. The main reason for that was reliability since the audio system was protected from heat and cold air as long as it was mounted lower on the center stack. The GS offered excellent interior room for the driver and more than adequate for the rear passengers.

Under the hood, Toyota installed a 3.0-liter V-6 engine, which was already proven on other vehicles. It paired it as standard to a four-speed automatic transmission, which sent the power to the rear wheels.