In September 2013 Lexus announced the introduction of 2014 IS F top performer.
With a V8 under the hood and on-track development, the car was a fast, on-road, best.

Lexus IS was launched in 1998 and ever since it was the model that constantly received a sport version. It also was the first Lexus model to receive the “F” letter for the performance model. When the ISF was introduced, it was meant to compete with the likes of the BMW M3 and the AMG C-Class.

From the first look, it was obvious that the F model was not the regular IS. A larger air-intake in the front bumper and side exhaust vents on the front fenders raised suspicions regarding what’s beneath the skin. The hood was bumped-up like the horses under the hood were ready to jump out of there. In the rear, there was a discreet lip-spoiler on the trunk, and the quad pipes exhaust that were there for a reason.

Inside, there were sport-bucket seats with high bolster support. The lower part of the steering wheel was covered with blue leather and the F-logo The same logo was found on the seats, with contrast stitching. The carbon-fiber decoration on the center console between the front was the final detail that told the difference.

Under the hood, there was a 5.0-liter V8 engine. It was mated to an 8-speed automatic gearbox only that allowed manual gearchanges via two paddle shifters behind the steering wheel. 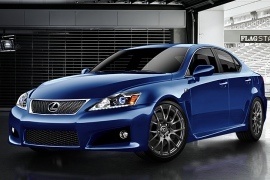