Lexus introduced the fifth generation of the LS in 2017 and updated it in 2020, after three decades on the market.
It was the real Japanese alternative for the luxury German brands.

By 2020, most car-customers within the premium segment knew that Lexus was founded as the Toyota’s premium brand. Lexus made a name of itself by topping the reliability charts all over the world, and offering hybrid versions long before they were a cool thing. The 2020 LS was updated with new features and technologies.

From the outside, there were minor modifications to the bodywork. At the front, the car featured a redesigned air-scoops in front of the wheels, with a mesh-grille instead of horizontal slats. At the bottom, the car-maker installed the radar for the adaptive cruise control system on the main grille. The air-vent behind the front wheel-arches was new as well. In the back, the designers applied a new design for the apron.

Inside, the 2020 model featured a wrap-around sensation of the dashboard, which was continued on the door panels with the same materials and textures. The screen for the infotainment system was fitted with a 12.3” screen. It wasn’t a touch-screen, but it was Apple CarPlay and Android Auto compatible. To access its menus, Lexus installed a touch-pad on the center console.

For the drivetrain, the car-maker installed the same powertrain as before: a twin-turbo 3.5-liter V6 plus an electric motor. It offered the LS500 with either a rear or an all-wheel-drive system. 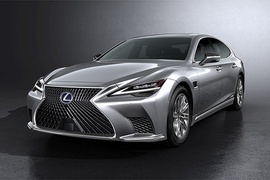