After Chrysler introduced the Airflow in 1934 and proved that the aerodynamic plays an important role in the vehicle’s dynamic, Ford introduced the Zephyr and became the first successful streamlined vehicle in America.
The U.S. market was already on the recovery path after the economic crisis, and the carmakers tried to recover the losses. In the personal luxury coupes, Ford already had a great advantage due to the V8 Flathead model, but it considered it was not enough so, the Zephyr Fastback came along.

It was a monument of art-deco on wheels, and the flared arches with headlights mounted on the front wings were a clear statement of evolution. The raked windshield was an important step ahead, even if it was flat. Due to its short, arched roof and sloped back, the Zephyr could get a higher top speed than other cars fitted with similar power under the hood.

Since it was a luxury coupe vehicle, Lincoln installed only top quality materials inside. The two occupants could stay on the leather bench with high cushions. The carmaker installed a center speedometer and a few additional gauges for coolant temperature, fuel level, amp-meter, and a clock for the dash panel.

Under the hood, the Zephyr Fastback featured a flathead V12 engine. It provided just 110 hp, and it was paired to a 3-speed manual. 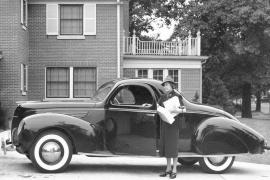