The British company, Lotus, started back in the 50s and ever since, it has only produced racing and sports cars.
All of their models’ names start with the letter “E” and the Evora nameplate has been around for over a decade.

Compared to the older versions, the new Evora was faster, sharper and more appealing than ever, with its badass racer look.

Could it be driven daily? Of course, if the fuel consumption was not a problem. The car was still a 2+2 and the British made everything possible to provide a comfortable ride, as comfortable as it could get for a vehicle that performed on the track as beautiful as a bird in the air.

The interior of the Evora was cozy, with Alcantara all around and carbon fiber elements. It had heated Sparco bucket seats and what made it so different from other cars produced in the EU, the unconventional buttons that were placed way up in the dashboard.

The sports car had a limited slip differential, a selectable drive mode and featured a Bilstein suspension. It was one of the cars that required the driver’s 100% involvement due to the amazing brakes and precise steering.

With great power comes great noise and vice verse, right? Well, not always, but it’s a “yes” for this one. The 3.5-liter V6 engine roared loudly and the sound entered the cabin, thus music was out of the question. 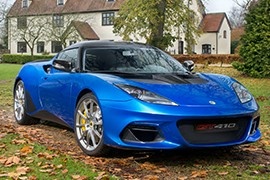