The partnership between the Indian company Maruti and the Japanese car-maker Suzuki led to more vehicles built in India, among them the second generation of the Swift.
Unlike other cars licensed by the Indian company, the 2006 Maruti was the same vehicle as the Suzuki Swift produced for Japan, Europe, or Australia. It was the most up-to-date car ever built in the two-decades history of the Indian manufacturer.

The rounded shape of the little vehicle didn’t make it looks like a bubble-car. Its sharp-cut headlights and straight lines of the grille formed an opposition to the vehicle’s general lines. Due to its body-colored door-handles and door-mirrors, the car didn’t look cheesy anymore, like its predecessor produced by Maruti in India, the 800. It even featured a small roof-spoiler on top of the tailgate.

Inside, the Swift featured a modern design for the dashboard, even though the materials used were not the best in its segment. A complete instrument cluster with a tachometer, speedometer, coolant temperature, and fuel gauge, along with a small LCD, offered enough information for the driver. There was enough room inside for up to five passengers, although without too much legroom on the backseats. The small trunk could have been expanded due to the folding rear seatback.

Under the hood, the Swift was powered by a 1.3-liter gasoline engine mated to a 5-speed manual gearbox. By 2007, Maruti sold 100.000 units before the Fiat’s 1.3-liter diesel engine was added to the engine choice list. 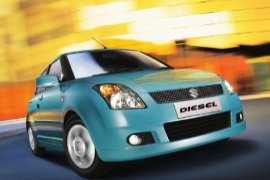