After the race toward clean vehicles, the race for hybrid-powered supercars made the petrolheads think again if that wasn’t a better choice, such as the McLaren Artura showed it in 2021.
The supercars world was changing. Porsche and Ferrari showed that very clear with the 918 and the SF90, but McLaren was not far behind. It waited and tried to create a supercar that could be driven as an electric vehicle for shorter distances. Thus, the McLaren tried to be as close as possible to a daily driver supercar.

Its aerodynamic shape served both for reducing drag resistance and fuel consumption. At the front, the car showed the already established McLaren design with angled headlights and side-scoops in the front bumper. On the sides, a set of deeper air intakes provided more air to cool and feed the mid-engine V-6.

Inside, the Artura showed another revolutionary cockpit design centered around the driver. McLaren moved the driving mode selector on the instrument cluster. Instead of a conventional center stack, the British carmaker mounted a portrait-mode touch-screen tilted toward the driver. As in any other McLaren, the sport bucket-seats featured high-bolstered sides to provide better support during high cornering.

The Artura was completely new from the ground up, developed on the new McLaren Carbon Lightweight Architecture (MCLA). Thanks to its compact electrical system that reduced the need for longer cables, the 2021 Artura tipped the scale up to 1395 kg (3075 lbs) dry weight, a key factor for the British supercar. The total hybrid components had just 130 kg (286 lbs), including the battery pack. As a plug-in hybrid vehicle, the Artura could drive up to 19 miles (30 km) in electric mode. 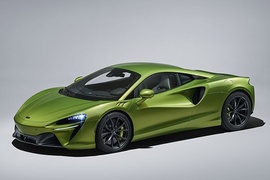