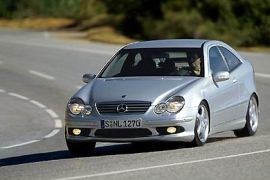 AMG built their only turbo-diesel powerplant at the beginning of 2000 and installed it on the second generation of the C-Class range, including the Sport Coupe version.
While most tuners focused their attention towards gasoline engines, Mercedes-Benz and AMG developed a high-performance turbo-diesel version. This resulted in the C30 CDI range, built in three body versions: four-door sedan, station wagon, and three-door hatchback. Mercedes-Benz built the latter to compete with the BMW 3 Series Compact and the newcomer, then the Audi A3.

There were just a few details that could tell the difference between a regular C-Class Sport Coupe and its AMG sibling from the outside. At the front, there was a new bumper with an A-shaped lower grille. Its standard 17” light-alloy wheels sported 225/45 R 17 tires at the front and 245/40 ZR 17 at the rear. At the back, the carmaker installed a dual exhaust with straight chromed tips on one side and a diffuser in the lower part of the bumper.

Inside, the instrument panel received aluminum accents on the speedometer and AMG lettering. Its bolstered bucket seats provided better side support than the regular seats from the rest of the Sport Coupe range. In addition, Mercedes-Benz offered the vehicle with more standard features such as the automatic gearbox, panoramic roof, navigation system, heated seats, and power-folding mirrors.

Under the hood, AMG worked on the 2.7-liter inline-five engine produced by Mercedes-Benz and increased its displacement to 3.0-liter. Thanks to a different turbocharger and a water-air intercooler, and unique injectors, it managed to squeeze 231 hp from the powerplant. To stop the car, AMG installed 345 mm (13.6”) disc brakes at the front and 300 mm (11.1”) at the rear. However, Mercedes-Benz built only 691 units between 2002 and 2004.