Mercedes-Benz introduced a facelift for the Typ 230 at the International Motor and Motorcycle Show in Berlin and built the car in two wheelbase options: N and L.
While the N stood for Normal wheelbase, the L stood for the long-wheelbase version. Although those times, official records didn’t refer to them as N or L. That differentiation came later. While the more extended version enjoyed a successful presence on the market, the N was barely sold in 1000 units and forced the carmaker to withdraw it from the price lists silently. Yet, the Cabriolet C was a good offer for those times since it was an open-top premium vehicle with four seats inside.

Along with the facelifted version, the 230 N Cabriolet C received a tilted radiator grille at the front and new headlamps enclosed inside more spherical housings, directly attached to the front fenders on cast legs. The carmaker installed the spare wheels on both sides of the engine compartment, leaving the car’s back only for the trunk. On the sides, the rear-hinged doors eased the ingress and egress, especially for the rear-seat passengers. The removable rag-top stood behind the rear bench when folded.

The cabin was fit for four adults, although it offered limited legroom for the rear ones. Still, it was adequate for short, urban trips or longer journeys with children in the back.

Under the hood, the German carmaker installed an inline-six engine with a 2.3-liter displacement, hence the car’s name, that provided 55 hp. Mercedes paired it to a four-speed manual gearbox. Mercedes-Benz installed an independent suspension with leaf springs in all corners. 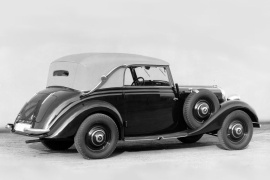