Mercedes-Benz introduced the Type 290 Roadster in early 1936 as a sport version for the range, a vehicle that received all the updates developed for the rest of the range.
The German carmaker was almost done developing a new model, the Type 320, but it still didn’t have any sports roadster. Sure, it had a few convertible versions, but not a roadster. It needed something to compete against another German carmaker located in Bavaria, BMW.

In 1935, Mercedes-Benz introduced new updates for the Type 290. In addition to increased power, it offered the car a choice of two wheelbases. For the Sport Roadster, it chose the short wheelbase version, which was lighter. The car featured a tilted, pinned-out radiator at the front, behind the chromed bumper, but in front of the front axle. Its engine compartment was flanked by the long and arched wheel fenders continued by the side steps. Like its sibling, the 1935 Cabriolet A, it featured two tumble-seats behind the cabin, in front of the spare wheels mounted in the back on the sloped side of the trunk.

Mercedes installed rear-hinged doors to access the luxurious yet sporty cabin. It provided comfort for two passengers in a leather-clad interior. The dash panel featured a center-mounted instrument panel.

Under the hood, the carmaker used the upgraded version of the 2.9-liter engine. Its 68 hp could propel the car to speeds above 100 kph (62 mph), and it could keep pace with its newest competitor, the BMW 327 convertible. 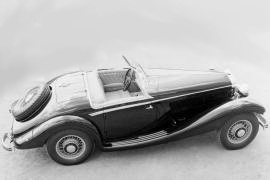