The 1935 Mercedes-Benz 500K Special Roadster was the rarest W29 vehicle built by the German car manufacturer.
It was shown at the Paris Motor Show in October 1935.

It was based on a special chassis, with a rear-set engine, while the other body variants of the 500 K were built on a standard one. That meant that the big, 5-liter supercharged unit was installed further behind the front axle.

The 500 K Special Roadster was built in only 50 units, out of a total of 761 units of the 500 K with all the variants. Unlike the other open-top versions of the W29 model, the Special Roadster had only two seats. To light-up the road ahead, that version was equipped with an additional pair of lights mounted on the A-pillars.

The inline-eight engine was based on the previous 3.8-liter unit used before with an enlarged bore and stroke and a different crankshaft. It was mated to a 5-speed semi-automatic gearbox, meaning that the driver could shift from fourth to fifth gear without using the clutch. The top gear was overdrive and it was designed for the motorway high-speed use. In those times, the Autobahn (German highway) network started to take shape and, as an “Autobahn-Kurierwagen” (Highway transporter) as it was called, its performance lived up to its name. 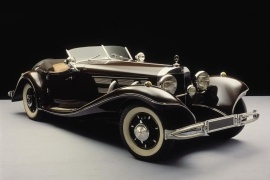