The 500 K Special Roadster was one of the fastest cars from its times a customer could buy from Mercedes-Benz, and it became a cult car over the years.
In 1934, Mercedes-Benz started to replace the previous 380 model with a new generation and unveiled the 500, W29 range. By enlarging the bore and lengthening the engine’s stroke, the 3.8-liter inline-eight engine grew to five liters. To further increase the power, Mercedes added a Roots supercharger with a switch on the dashboard.

The new chassis allowed the carmaker to create a long bodywork with only two seats in the cabin and two rumble seats in the back, the so-called “mother-in-law” seats by the Germans. The front of the car showed the rear-set engine position, meaning that the powerplant was installed behind the front axle. Even the pinned-out radiator sat behind the wheels hubs. The carmaker added a thick, rigid front bumper extended in front of the wheel fenders. It was a so-called “Autobahn-Kurierwagen” that described the cars built for sustained high-speed travels. A two-part, raked windshield protected the occupants from the wind. Behind the cabin, on the sloped rear end, the carmaker installed two spare wheels. One was in a special compartment covered by a lid. When both wheels were installed, that lid was removed, and the second spare came on top.

Mercedes-Benz installed rear-hinged doors to access the luxurious cabin. The leather upholstery and the wood panels were finished to perfection. A big, four-spoke steering wheel ensured the driver that it had the best possible control over the car.

Under the long hood, Mercedes-Benz installed a long engine and two additional horns. The supercharger increased the power from 100 hp to 160 hp at a touch of a button. The carmaker paired the inline-eight unit with a semi-automatic four-speed gearbox. Shifting from third to fourth didn’t require the use of the clutch. 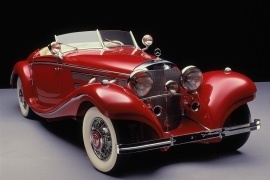