The Mercedes-Benz 500K was one of the rarest vehicles built by the German car-maker.
It only made 761 chassis and 70 of them were supplied to specialist coachbuilders.

On the brink of WWII, the Mercedes-Benz build the “Autobahn-Kourier”, a vehicle that offered performance, comfort, and high-class status. The car was launched in March 1934 at the International Motor and Motorcycle Show in Berlin. The new 500 model with supercharger” was exhibited in Berlin in just one version at a price that was specially constructed for particularity high speeds.

The Sport-Limousine version was one of the rarest, with only 12 various coupe variants from the total of 761 chassis built. The statistics were rounded off by 53 saloons and 28 open tourers. The car was built on the chassis with the “rear-set” engine, which means that the vehicle had the inline-eight unit behind the front axle. The big, front fenders were extended toward the cabin. The Sport-Limousine moved the spare-wheels in the back, on top of the trunk, to improve the efficiency. It wasn’t about the fuel consumption, but about the aerodynamics.

The luxurious interior was matched to the high price of the vehicle. The price of the vehicle was RM 22.000, which was one of the highest prices on the market. Only the chassis cost was RM 15.000. The 500 K used a Mercedes-Benz overdrive transmission with the semi-automatic gearshift. Shifting from third (direct) gear into overdrive did not require the use of the clutch. 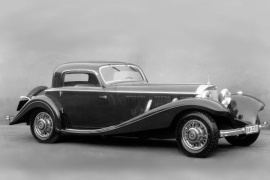