Based on the 2014 Mercedes-Benz C-Class (W205), the AMG C63 version was the top-performer of its range.
It offered the highest power and the best technology to make a luxury car goes faster.

The C63 AMG was the most successful model of AMG vehicles. The second generation lost the naturally aspirated V8 in favor of a twin-turbo 4.0-liter engine. Unlike its rival, the M3, it was built to offer more comfort and a similar level of performance.

When compared with its siblings from the C-Class, it featured a more aggressive styling. The wide and short grille with the big badge supported by the twin-aluminum wings, the huge side-scoops in the front fender that left little room for the middle air-intake were all part of the game. The car had to look aggressive but, in the meantime, its aerodynamic was with a purpose. A chromed “V8 BITURBO” chromed badge was installed on each of the front fenders. The rear of the car featured a new design for the bumper and a diffuser, plus four chromed exhausts.

Inside there were sport-bucket seats for the front passengers and fitted with all the modern technology for the comfort of its occupants. The instrument cluster featured two round analog dials with a carbon-fiber background. Between the binocular look of the gauges, there was a small TFT display for the on-board computer. The rear seats were profiled for two passengers. A panoramic roof was offered as an option.

Under the hood, the C63 was offered in two versions: C63 and C63S. Both featured special suspension with adaptive dampers and the AMG SPEEDSHIFT MCT 7-speed sports transmission. The dynamic engine mounts were fitted as standard on the more powerful C63S and offered as an option for the non-S version. 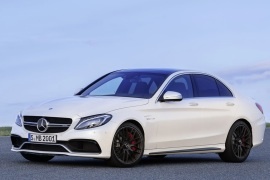