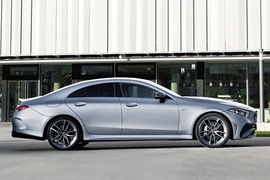 Mercedes-AMG introduced a facelifted version for the third CLS generation in 2021 and added more technology to the sporty four-door coupe.
Since the rest of the range received some improvements, it seemed natural to see some improvements for the CLS AMG 53. There were some, but less than expected. Maybe the most important technical detail was the drop of the rear-wheel-drive 53 AMG versions. Thus, the carmaker admitted that after some point, the sporty four-door-coupe needed an all-wheel-drive system.

Since the rest of the rang took the AMG-styling as a standard, the true performance model had to come with something different. And it did, by introducing the Panamericana grille with vertical slats. The carmaker made the windshield’s surroundings from polished aluminum or, in combination with the Night Package, in high-gloss black.

Inside, the AMG featured carbon-fiber trims for the dashboard, center stack, center console, and door panels. The sport bucket seats with high bolstering were fitted as standard. Another major improvement was for the dashboard, which sported a pair of 12.3” screens under the same glass area for the new infotainment system and the instrument panel. A touch-pad replaced the previously used controller for the MBAUX interface and brought AI-enhanced functions that helped the driver.

Unlike the rest of the CLS range, the AMG version featured different driving modes, including a drift function, which seemed to be demanded by its customers. Unfortunately for its fans, the CLS 53 AMG featured the same drivetrain as before, with a 453 hp combined output. 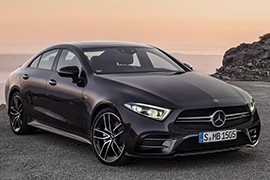 With the introduction of the inline-six AMG engine in the 2018 CLS lineup, the four-door premium coupe achieved a new level of performance.
There are more vehicles in the AMG lineup that offered the advanced 3.0-liter six-cylinder engine. The E-Class, E-Class Coupe, and E-Class cabriolet were just a few examples. It was truly the kind of engine that it worth built a car around it. It was that good.

The first generation of the Mercedes-Benz CLS was the heart of the four-door coupe revival. It wasn’t a brand new idea but it was forgotten and the Germans successfully brought it back to life. When the second generation came on the market, there were already some other car-manufacturers that had something in the segment. In 2018, the CLS had to come up with something more attractive. A different approach. And so, the AMG 53 was born with the twin-blade grille, the A-wing design on the apron, and the specific AMG side panels.

The six-cylinder engine was helped by an EQ booster-generator that played the starter-generator role. Unlike some other belt-driven systems, this one was mounted between the engine and the transmission. It didn’t have too much torque but it had enough to compensate the turbo-lag. Thus, the engine had three “helpers”: an EQ to cut the lag, an electric compressor, and an exhaust gas turbocharger. These features were possible due to a 48-volt architecture of the car. And the instant response of the power helped the car sprint from 0 to 100 kph (0-62 mph) in 4.5 seconds.

To keep the 435 car on the road in any surface conditions, an all-wheel-drive was fitted. A 9-speed AMG SPEEDSHIFT TCT transmission was fitted as standard.