Finally, the new era and interior technology caught up with the E 53.
Interior enhancements and some subtle outside modifications made the facelift much more worthy than just a few extra colors or light-alloy wheels in the option list.

The hood now has two powerdomes, suggesting that there is a V-type engine in there. Actually, there is an inline-six unit with the same big turbocharger helped by an electric compressor to cut the turbo-lag. The total output of the powerplant can be translated into 435 hp and 520 Nm (383.5 lb-ft) of torque. The transmission is the same AMG SPEEDSHIFT TCT 9G paired with the 4MATIC+ system, which allows not only a variable front/rear torque distribution but also from left to right at the rear.

Inside, the infotainment system has been upgraded from the former COMMAND to the new MBUX. It features touch-screen controls and a better connectivity with Android Auto and Apple CarPlay. This system works in coordination with the complex instrument cluster. The two displays for the instrument cluster and MBUX displays blend beneath a shared glass cover to form the Widescreen Cockpit.

Via the AMG menu, the driver can call up various special displays such as Engine Data, gear speed indicator, Warm-up, Set-up, G-Meter and RACETIMER. The MBUX Augmented Reality function also allows the ideal racing line of a stored race track to be displayed on the multimedia display or optional head-up display, allowing the driver to improve lap times with a virtual instructor on board. 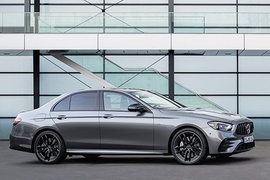