The name has been changed from SLK to SLC and so was the AMG engine.
In 2016, instead of a 5.5-liter V8, the customers could choose for the SLC 43 twin-turbo V6.

The first AMG 43 badge was placed on a 1998 C-Class. Back then, it was a naturally aspirated V8 unit and it was a fine machine. Over time, new emission rules and the need for more power forced the AMG to change the approach.

When it came to the market in 1996, the SLK was praised for its metallic retractable roof. The third generation was launched in 2011 with a 2016 facelift when the SLK became SLC. For the AMG version, an “A-wing” form dominated the grille which was in high-gloss black. A silver splitter was installed to enhance the dynamic look of the vehicle.

Inside, the contoured sports seats gave the driver ideal good support in the sport-bucket seats. The instrument cluster offered all relevant information is arranged on a layout optimized for a dynamic driving style with two tube-shaped round dials and a 4.5” color display. The gear selector was on the center console and the driver could choose to change the gear with paddle shifters. 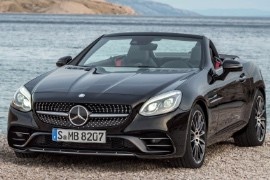