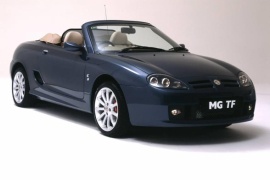 In 2002, the British carmaker Rover introduced a facelifted version for its little roadster TF, sold under the MG brand.
The classic British roadster used to feature front engines and rear-wheel drive. But the MG TF was not a classic vehicle. It was more like a modern interpretation of the roadster concept. It featured a mid-engine and rear-wheel drive system. After a troubling experience with BMW, MG tried to survive and built the little roadster with Toyota engines.

After six years on the market, the TF was refreshed. Its new headlights were covered with clear lenses and a sharper nose. Its turn-signals were moved from the bumper inside the headlamps. A smaller, two-slats grille replaced the previously used one that featured a vertical bar for the octagonal MG badge. In the rear, only a keen for details eye could have noticed a difference.

Inside, the British carmaker changed only a few details, such as the gear-knob, steering wheel, and a few materials used. It already had financial problems, and simply there was not enough money to do all the changes.

Under the hood, MG installed a choice of engines both from its production line and from Toyota. The latter was offered with a variable valve timing system that allowed a power increase to 160 hp. 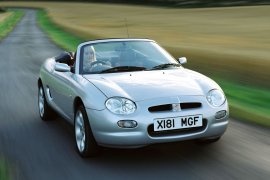 Launched as part of GM’s statement of having gotten back into business in 1992 and the success registered by parent company BMW’s Z3 model, the F model was one fats car.
The car came with a choice of two engines displacing 1.8 L and delivering power outputs of 118 hp, for the regular K-Series 16V engine and 145 hp for the VVC version respectively. Besides the fortunate mix of performance and fuel economy, the car was equipped with a less known type of suspension, called Hydragas. The system comprises nitrogen gas-filled displacer units that replace that act as efficient replacements for the conventional steel springs.