The second generation of the L200, named Triton on specific markets, brought a new design language for the trustworthy Japanese pickup and improved drivetrains.
With the second generation of the L200, Mitsubishi tried to offer more than just a rugged workhorse. It introduced the vehicle as a lifestyle pickup, with a more refined design than its predecessor. But it kept its rough off-road abilities while it offered a different look than a farm tractor.

In the Crew-Cab version, the L200/Triton featured a new design language, with rounded shapes and sharp angles. Its raked grille and pentagonal headlights were unusual for a pickup. Its plastic, wrapped-around bumper sported the grille mounted on a body-colored vertical slat in the middle of the grille. The crew cab was more extended than the single cab version, but it offered just two doors. Thus, it could provide more interior room than the single cab, but it still had a 2220 mm (7.3 ft) long bed, which was more than what the double-cab could provide.

Inside, the carmaker installed a pair of bucket seats at the front separated by a tall center console with an armrest. Regardless of the trim level, it featured the same hard-plastic dashboard, which reminded the customers that it could do hard-working jobs. Behind the front seats, the carmaker added a storage area. Also, thanks to the more extended cabin, the front seats could still tilt while they were all the way pushed back.

Under the hood, depending on the market, Mitsubishi installed various engines. The L200 was available with either a choice of four engines. Two turbo-diesel versions, a 2.5-liter or a 3.2-liter, or two gasoline powerplants with 2.4-liter or 3.5-liter displacement. 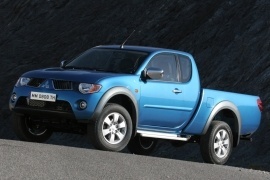