After almost a decade since its first appearance on the market, the Lancer received a final facelift before it was completely changed in 2017.
When Mitsubishi introduced the Lancer in 2007, nobody thought that the carmaker would keep it into production for such a long time. But the struggling Japanese carmaker couldn’t afford to change it. Its finances were hit hard during the world financial crisis, and its products were already old and difficult to sell. The Lancer was supposed to save the brand, but it just couldn’t do it by itself.

For 2016, the Mitsubishi designers reshaped the front bumper and made it bigger, and included the LED daytime running lights on the outer side-pods. Unlike many other carmakers, they didn’t install LED headlights since they were too expensive to implement. On its sides, the Lancer featured a new set of side-skirts.

Inside, the carmaker kept the same spartan look of the interior, but it installed an updated touchscreen infotainment system on top of the center stack. The binocular-style instrument cluster remained the same as before, with a TFT display between the tachometer and speedometer. For the sedan version, the Lancer featured a fixed, split-folding rear bench seatback. 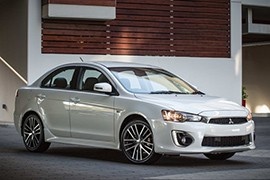