As most of the car-manufacturers did, Nissan introduced some vehicles for specific markets such it was the case with the 2011 Almera Sedan.
It was introduced for the South-East Asian market.

The Japanese car-maker was already in an alliance with Renault and the French engineers had good expertise in building cheap cars for rough roads, such as those from Thailand and the Philippines. Nissan, on the other hand, had a better reputation in that area and so, the 2011 Almera was introduced as an inexpensive family sedan.

With a design that wouldn’t win any beauty contest, the 2011 Almera Sedan followed the basic lines of the Versa and Tiida. The three-box sedan shape was built for a big interior room and trunk. It looked like it was built from inside out.

The only engine available was a 1.5-liter gasoline engine mated to a standard 5-speed manual, and an option for an automatic, while the top trim level came with a standard automatic tranny. The front McPherson suspension and trailing arms in the rear were built for harsher terrain, and with a bigger ground clearance than a regular sedan. 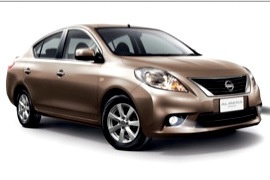