A seven-seat passenger was always a good idea for specific markets, and Nissan introduced the Grand Livina in 2006 for South East Asia and then for other countries.
Nissan knew that in some markets, there was a high demand for affordable seven-seat vehicles. It already offered a barely enough sized vehicle for seven passengers in India, even though it featured seven seats. The Livina was a different story, though. Nissan built it on an extended version of the Tiida’s/Almera platform. Its shape resembled the European Dacia Lodgy, but it was more stylish.

From the outside, the Grand Livina featured a specific Nissan front end with Tiida-like angular headlights. A chromed decoration adorned the black grille between them, while the bumper featured an A-shaped lower grille flanked by the round fog lights. The waved line that started from the front fenders continued on the door panels onto the rear quarter panels. Its tall window was needed for a roomy greenhouse, while in the back, Nissan installed a liftgate.

The interior featured a hard plastic dashboard and round vents for the ventilation system. An AC unit was available as an option. Its front and middle-row seats were high-mounted to provide enough legroom for full-grown adults, while the rear folding seats were squeezed between the wheel-arches.

Under the hood, Nissan installed a choice of two gasoline engines which provided 108 hp and 126 hp, respectively. Strangely, the carmaker offered a four-speed automatic gearbox only for the less-powered version. 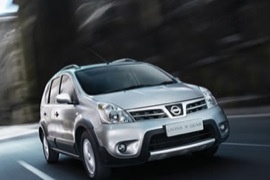