The fourth generation of the Nissan Quest was introduced at the 2010 Los Angeles Auto Show.
While other car-makers started to drop their big MPVs, the Japanese company struggled to find its customers.

From 2004 ‘till 2009, the MPV sales dropped from 1.1 million units to a mere 400.000. It was understandable why most of the car-makers didn’t want to go there anymore. The customers already moved toward the SUV segment. But Nissan kept the big family car. It wasn’t a smart choice.

The tall minivan tried to look sportier in a segment where that was the least attribute someone expected. The trapezoidal grille and the cat-eye headlights style made the car look somehow aggressive. An ascending sculpted line on the side improved the dynamic appearance. In the back, a flat and vertical tailgate with a roof-spoiler on top ended the MPV design.

The interior was an important aspect of the Quest. The dashboard styling looked inspired by the sportier sedans such as the Altima. The in-dash gear selector was close to the steering wheel. The three-dial instrument cluster placed the speedometer in the middle. The Bose sound system was offered on the options list, along with a navigation unit. The seven-seat configuration with two captain chairs on the second row added more comfort to the vehicle. Even the last three-seat bench in the back was good for full-grown adults.

The Quest was offered with a 3.5-liter under the hood that offered 260 hp. It was mated as standard to a CVT. That type of gearboxes is known for being efficient, but not sporty. Yet, the Quest offered reasonable 0 to 60 mph (0 to 97 kph) times and still being fuel-efficient in its class. 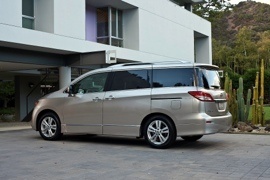