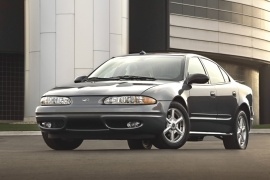 It was the end of the road for the Oldsmobile brand, and the Alero wasn’t able to save it even though GM exported it into Europe and Israel to increase its sales.
Oldsmobile was already in trouble. Its cars were losing money despite using the same platforms as other GM products. The Alero shared its platform with the Chevrolet Malibu and the Pontiac Grand Am, to name just a few. As a result, it faced competition from its siblings. Moreover, other Oldsmobiles shared the same platform as well, such as the Cutlass and the Achieva. But the Alero was different in a way that the customers didn’t like enough.

Its rounded shapes were a remain from the bio-design era, which was almost gone by the time the Alero appeared on the market. Its narrow, rounded headlights, with corner-mounted turn signals, resembled a sporty vehicle, while the Alero was a three-box sedan. The carmaker made it available as a coupe as well, but it wasn’t a sport vehicle. Its waved beltline raised above the rear wheel arches. At the back, the tall taillights were split between the quarter panels and the trunk lid. The overall look was not everybody’s cup of tea, but it attracted many buyers.

Inside, Oldsmobile continued the bio-design theme. It made a rounded dashboard with various curved lines for the passenger area and the center stack. Its instrument panel was straightforward, with only four dials and an LED for the odometer placed on the upper side.

Under the hood, Oldsmobile offered the Alero with either an inline-four or a V-6. The less-powered version provided a manual gearbox, while the V-6 received a four-speed automatic as standard.