Perodua introduced the Axia on the Malaysian market in 2014 and facelifted the model twice, in 2017 and 2019, to keep the car fresh on the market.
The 2019 Axia came with more improvements in 2019 and added functional and aesthetic features to make it more appealing to the customers. It was also one of the most affordable cars on the market. Perodua didn’t design the car by itself. It was, in fact, a rebadged Daihatsu Ayla with some restyled elements.

At the front, the carmaker installed a grille above the bumper and a trapezoidal-shaped one in the apron. On the sides, a pair of scoops hosted the fog lights. The angled and angular shaped headlights featured signature C-shaped daytime running lights. On the sides, the full-option version came with power retractable and adjustable mirrors. An aerodynamic kit with body-colored side sills made the car looks sportier.

Perodua installed an ADAS (Advanced Driving Assistant System) with autonomous braking and pedestrian protection on the Axia. It was the cheapest car on the market to feature that safety equipment. Inside, the dashboard was short and featured a three-curves-shaped instrument cluster where the speedometer took center-stage flanked on the sides by the tachometer on the left and an LCD on the right. It offered room enough for four adult-sized passengers and a trunk that could carry 260 liters (9.2 cu-ft) of luggage.

Under the hood, Perodua installed a 1.0-liter three-cylinder engine that provided just 68 hp. It was paired as standard to a five-speed manual, while a four-speed automatic was on the options list. 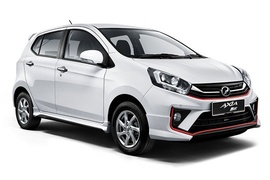