Porsche had a long history with the T-versions for its vehicles.
It was used for “Touring” cars. The cars wearing that letter were stripped-out from luxury items in favor of more performance.

Porsche raced and won many races, including the Tourist Trophy from Man Island and, of course, the famous Targa Florio. From then on, the T-models were chosen to be offered for those who asked for more performance and cornering speed.

On the outside, the 718 Boxster T had featured 20” light-alloy wheels painted in high-gloss titanium gray. Since it was fitted with the PASM (Porsche Active Suspension Management), the ground clearance was lowered by 20 mm (0.8”) than the regular 718 Boxster. The door-mirrors were painted in gray as well. In the back, the centrally-mounted exhausts with twin tailpipes were black chrome-plated.

Inside, the 718 Boxster T featured door-pulls instead of handles. The infotainment unit was removed and a big storage box took its place. It was useful for gloves. The two-way adjustments seats with black Sport-Tex center sections featured 718 logos embroiled on the headrests.

The twin-turbo flat-four engine offered 300 hp. It was paired with a 6-speed manual, but a 7-speed PDK (dual-clutch) automatic was offered as an option. The rear locking differential and the PTV (Porsche Torque Vectoring) were standard as well and helped the car achieve a better cornering speed. On top of that, the 718 Boxster T featured dynamic gearbox mounts, to minimize vibrations. 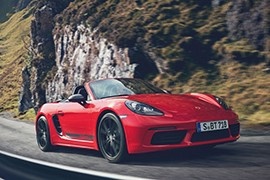