The Cayman S took its “917” number from the famous Porsche 917, which won the Targa Florio race in 1959.
Unlike its ancestor, the 2016 model was a sports-car for public roads.

After the introduction of the Porsche Boxster, the customers asked for a closed version of that entry-level Porsche. Despite the pleasure of driving under the open sky, a closed bodywork ensured a stiffer construction and a higher cornering speed. On top of that, a coupe was lighter than a convertible. The coupe brother of the Boxster was named Cayman. The 2016 model featured a flat-four engine and rear-wheel drive.

The exterior has some clues about the Porsche family, especially the front fascia with unmistakably headlights shape and flat trunk lid. No, there is no mistake, the trunk is in the front and the engine is behind the driver. On the sides, the large air-intakes in front of the rear wheels are used for engine cooling.

Inside the cramped cabin, there is room for two passengers. The instrument panel features two big analog dials and one TFT display on the right side that shows various information regarding the car’s parameters or the navigation system. On the center console, there is the infotainment PCM unit (Porsche Communication Management) that can be connected with smartphones via a designated Porsche App.

Unlike its less-powered Cayman, the S version was fitted with a turbocharged 2.5-liter engine. Along with the direct fuel injection, the result was a 350 hp beast which could hold the maximum torque between 1.900 and 4.500 rpm. It was paired as standard with a 6-speed manual, but a 7-speed PDK (double-clutch automatic) was on the options list. 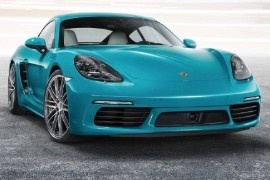