The 2020 Porsche Turbo S was heavier and bigger than its predecessor, but due to a more powerful engine and a new gearbox it was faster and it ended the battle against Tesla Model S.
The history of internal combustion engines was not over when the Porsche 911 Turbo S was introduced to the market. And it wasn’t just about the power and the way it handled it. It also was about the look.

The exterior might not be as aggressive as some other Porsche models, such as the GT3 or GT2, but the new front apron was a form-follow-function concept. It featured a lip on its lower side that was extended when needed to reduce the aerodynamic lift. The three big air-intakes looked like there was a trade between the engine department and the brakes department who will get more room for cooling. The car featured 20” front wheels and 21” rear wheels. In the back, the engine lid was small, placed between the retractable wing and the rear windscreen.

Inside, the Turbo S featured a completely new dashboard. The tachometer was the only analog gauge in the instrument cluster. It was complemented on its sides by two other TFT displays. In the dashboard, at the same level as the three-spoke aluminum steering wheel, there was the screen for the PCM (Porsche Communication Management) infotainment unit. The 911 Turbo S was fitted as standard with 18-way power-adjustable seats in the front and two tiny folding seats in the back.

The engineering part of the car was the biggest improvement. It offered a newly developed, direct-injected 3.75-liter engine. It was fed by a pair of VTG turbochargers (variable turbocharged geometry) with a total result of 650 hp (70 hp more than its predecessor). It was paired to a standard 8-speed PDK (dual-clutch) automatic transmission and the result was clear: it was quicker than the Taycan Turbo S. 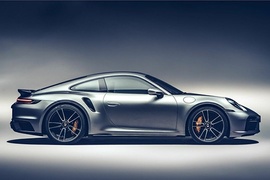