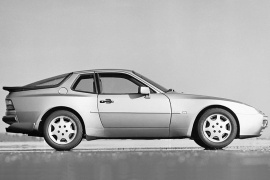 The American market asked for more power from the sports-car developed by Porsche. Since the German car-maker already had a good experience with turbocharged engines from the 911 Turbo lineup, the idea of a 944 Turbo seemed the best solution.

The 1985 Porsche 944 Turbo featured a modified front fascia than its siblings. The tall bumper with the apron featured more grilles, needed to cool the engine and the intercooler. It kept the pop-up headlights from its predecessor, and in those times that was considered an ultimate reflection of a sports-car. An integrated, hard-rubber, a spoiler was added at the back of the car, on the lift-gate. It featured body-colored bumpers, with a rubber strip on the one in the back. The Turbo badge was shown clearly in the back, with the Porsche letters on the bumper. An additional apron was installed under the bumper.

The interior was modified and the controls for the power-windows were moved from the door to the bottom of the center stack. The instrument cluster was different, with a Turbo gauge installed in the tachometer dial.

Under the hood, Porsche installed a 2.5-liter engine with four cylinders. The turbocharger was carried-over from the 911 Turbo and a pressure regulator knob was installed as an option for the Turbo S. Thus, while the base Turbo offered 220 hp, the S version added 30 hp more. The transmission was the same 5-speed manual. For the braking system, the 944 Turbo/Turbo S, was fitted with the Brembo brakes carried-over from the 911.