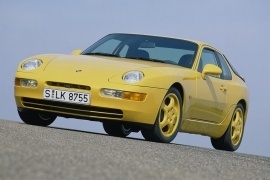 The Clubsport version of the Porsche 968 was designed for track and the road from home to the track.
It was more of a weekend racer rather than a daily driver. But it could do both.

Porsche built only sports-cars back in the ’90s. It was its specialty and even the 928 GT was considered a sporty vehicle and had special versions. The 968, on the other hand, was designed on the base of the 944, which was used for racing in various parts of the world.

The 968 Club Sport was designed with racing in mind. The exterior looked almost the same as any other 968. With its long hood and short cabin, it had the image of a big engine in the front, even though there was just an inline-four unit. In the rear, a 968 CS badge, and a small spoiler were installed on the liftgate.

Inside, the car was stripped down to its essentials. It was fitted as standard with slim bucket seats, but there was a no-cost option for the regular seats. There was no bench in the back. Moreover, instead of a big shelf above the trunk area, there was a flimsy piece of fabric. The car came without a radio or an AC-unit, but these could have been added from the options list. To open or close the windows, a manual system was installed instead of the powered one.

The 968 CS was fitted with larger wheels, larger disc brakes, and stiffer suspension. Further reinforcements were installed in the engine compartment between the dampers’ towers. The engine was a 3.0-liter unit fitted with the variable valve timing named VarioCam from the standard 968. It offered 240 hp, like the rest of its stablemates. But when prepped for the race-track, it could get some more with new parts installed. 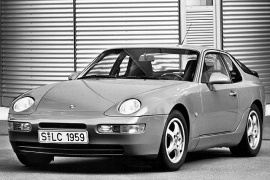 Porsche needed a car to expand its lineup.
In 1982 it launched the 944 model, which used a front-engine and rear-wheel-drive. By 1991, the outdated model required a replacement. That was the 968.

The 924/944 was built as a more affordable Porsche sports-car. It also was the beginning of water-cooled, front-engine cars for the German car-maker. To achieve a good balance, the gearbox was mounted in the back. The same concept was adopted for the 1991 Porsche 968.

From the outside, the most striking part of the car was the headlights system. Those were tilted back on the hood and were risen when they were needed. The long hood and raked A-pillars made the car looks like a GT. The sloped back covered a wide, but not so deep, trunk. The overall design was a fine blend between the 911, 944, and 928 models.

Like its predecessor, the 944, it featured two seats in the back, fitted for very small children. That was a step forward when compared to the room in the back of a 911. By lowering the seatback, the trunk was extended.

The technical platform featured a combination of McPherson struts in the front and semi-trailing arms in the rear. Under the hood, there was an inline-four engine with a 3.0-liter displacement. It was mounted way back, to help the car reach a balanced weight distribution. The VarioCam variable valve timing allowed a better specific power. The six-speed manual was fitted as standard and there was no other option for the 968.