In 2017, the third generation of the Porsche Cayenne was unveiled at the Frankfurt Motor Show.
Its top model was the Cayenne Turbo, with 550 hp under the hood.

On the outside, there was four LED for the running lights incorporated into the headlights. The actual shape of the headlights was inspired by the 918 supercars. For the Turbo version, there was a different bumper with a lower splitter and a very wide grille that visually made the car look wider. Not like it wasn’t wide enough. From the side, some subtle sculptured doors and fenders helped the car’s aerodynamic. In the rear, a roof-spoiler incorporated the third stop-light. The rectangular exhaust pipes were peaking on both sides of the rear diffuser.

Inside, there was a mixed feeling about the car, with some elements typical for a sports car and some others for an SUV. On the three-spoke steering wheel, there was a rotary knob for the driving settings from comfort mode to sports. The instrument cluster was a mix between analog and digital. The tachometer was analog, but on the sides, it featured TFT displays for navigation and vehicle settings. On the main infotainment screen, there was the navigation system and the audio. It featured only Apple CarPlay connectivity.

Under the hood, the Cayenne Turbo featured a 4.0-liter V8 unit with two turbochargers. It was mated as standard to an eight-speed automatic transmission. 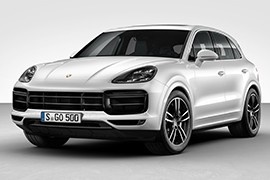