The third generation of the Porsche Cayenne was unveiled in August 2017 and launched in front of the public at the Frankfurt Motor Show in the same year.
The E-Hybrid version came in 2018.

Porsche used the same platform as the Bentley Bentayga and the Lamborghini Urus for the third generation of the Cayenne. It was named MLBevo and offered the possibility to introduce a hybrid version. It also featured a rear-axle steering system, very useful in tight parking spots and improving cornering speed.

At the front, the Cayenne E-Hybrid featured a continuous grille design, interrupted by three vertical slats. The turn-signals from the door-mirrors featured a dynamic light move thanks to the LED technology. On the side, the dynamic look was enhanced by the raked D-pillars and the roof-spoiler. In the back, two, wide, and chromed rectangular exhausts were placed under the bumper, in the apron. Like its predecessor, the 2018 Cayenne E-Hybrid featured green brake calipers visible through the 19” light-alloy wheels.

Inside, the Cayenne E-Hybrid featured the new 12.3” Full-HD touch-screen from the Porsche Communication Management infotainment system. For the instrument cluster, only the tachometer remained analog, and it was flanked by two 7” displays, needed for other relevant driving data. Due to the longer wheelbase, the rear passengers got more legroom than before, despite the thicker front seats.

Porsche fitted the Cayenne E-Hybrid with a turbocharged 340 hp 3.0-liter V6 engine combined with a 136 hp electric motor for the drivetrain. Total combined power output reached 462 hp. The whole assembly was mated to an 8-speed automatic transmission that sent the power in all corners. 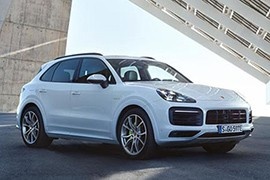