The introduction of the four-seat Porsche was a dream that came true with the first generation of the Panamera.
In 2017, the second generation was launched in two body versions: sedan and Sport Tourismo. A Porsche couldn’t bear the “station-wagon” name.

The 2017 Turbo S E-Hybrid Sport Turismo was more like a shooting-brake than a station-wagon. More like a lowered Macan than a station-wagon Panamera. Its raked rear looked like it was there to enhance the aerodynamic rather than increase the cargo area. Yet, that tailgate was designed for both. And since it didn’t want to mimic the rear-end of a 911, it might be just the better solution.

Inside, the Turbo S E-Hybrid Sport Tourismo looked just like the regular Panamera. It lost the multi-button center console arranged like on a Vertu mobile phone. It had the same haptic buttons on a display. Also, the infotainment unit was large and had a fast-responsive touch-screen. It supported only Apple CarPlay. The longer roof-line allowed a higher rear door and easier access to the three seats in the back. The trunk was larger by 25 liters (0.9 cu-ft) than the one on the regular Panamera.

For the powertrain, the Turbo E-Hybrid Sport Tourismo featured a twin-turbo V8 engine plus a 100 kW (136 hp) electric motor mated to an 8-speed automatic (double-clutch) gearbox. The lithium-ion battery had a 14.1 kWh capacity and offered a 49 km (30.5 miles) of electric autonomy. 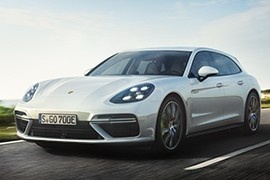