The year 2013 came with a new Renault Clio RS, a totally changed vehicle with a new engine.
While we were used to the 2.0-liter mounted on the previous models, in 2013, Renault chose to equip the car with a 1.6-liter 4-cylinders turbocharged engine, developed by Nissan-Renault.

What was a completely new thing, the RS was no longer available with a manual gearbox. That had both downsides and benefits. The Renault purists might have been a bit disappointed, however, the dual-clutch automatic transmission got the attention of a new group of buyers that were looking for both comfort and sportiness. To make things better, the car was equipped with steering wheel-mounted paddles, borrowed from the Nissan GTR.

The new engine developed the same power as the 2.0-liter mounted on the older versions, 200 hp, however the torque increased from 215 nM to 240 nM. The fuel efficiency was also improved, reaching a consumption of 6.3 L / 100 km. Of course, if drivers used the Race mode, the fuel efficiency was no longer a topic to discuss.

For the more passionate buyers who wanted to take their cars on the track, the car was equipped with a top-notch system that could log the track sessions and even store them to a USB stick. The lap times, the track position and other details could be checked on the Renault Sport website. That was as close as possible to an F1 experience! 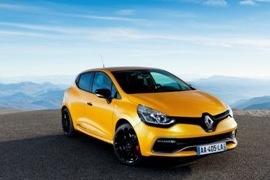