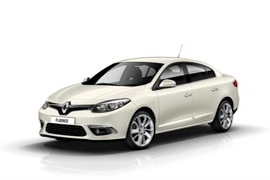 After the dismissal of the second generation of the Renault Megane sedan, the three-box version of the compact sedan vehicle was named Fluence.
It was a car built mostly for the East-European market.

In some markets, the three-box vehicles are considered more attractive than the hatchbacks or the station-wagons. A sedan company-car was considered a business vehicle, not just another vehicle from the lineup. Due to that reason, Renault had great success with the first two generations of the Renault Megane Sedan (three-box). For the third generation, it changed the strategy and the sedan was named Fluence but shared most of the parts with the Megane.

The simple look of the Fluence was drawn for a minimal cost with the production. The front parts were similar to the Megane. A new design for the LED daytime running lights was adopted to offer a more exclusive image and to comply with the European regulations.

Inside, there was a five-seat cabin with some parts carried over from the Megane III base trim levels. The cloth upholstery and plastic panels were stamped to look like stitches. The flat seats and bench didn’t offer too much grip while cornering and, unlike the rest of the Megane range, it featured a hydraulic power-steering. The top trim level featured an R-Link infotainment system. The Bluetooth connectivity was offered from the entry-level.

Under the hood, there was a choice of two engines: 1.6-liter gasoline, or a 1.6-liter turbodiesel. Both versions were mated as standard to a manual gearbox with 5-speed or 6-speed respectively. A CVT or an automatic was on the options list as well. 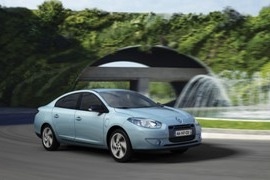 Based on the stretched version of the Renault Megane, the Fluence ZE offered electric mobility at an affordable price.
It was produced with help from their allies, Nissan.

The third generation of the Renault Megane was offered in all shapes: 3- and 5-door hatchback, convertible, station-wagon, and sedan. The latter was named Fluence and was not offered on all the markets. Its electric version though, the Fluence ZE, was sent in the U.K. to add more value for the French car company.

The Fluence ZE was longer than the regular, internal combustion-powered Renault Fluence. That was due to the battery pack and added a better look to the car. Its size went over the compact-sized vehicles and it could even threaten the Laguna hatchback. Its slim headlights swept on their sides and the square front grille gave the car a better look than other Renault on the market.

Inside, the Fluence ZE featured a different dashboard design, with a TomTom navigation system mounted on top. The instrument cluster featured a speedometer in the middle, a battery level on the left, and a small dial on the right with instant consumption. An LCD was placed on the right as well, for the onboard computer. Due to the big wheelbase, the rear seats offered plenty of legroom and enough headroom

The powertrain came from a Nissan Leaf and it offered a decent amount of power and overall speed, especially for the city traffic. It was not quick nor fast, but it offered enough for a daily commute. 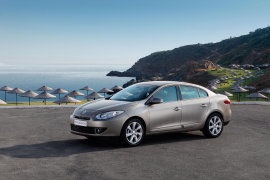 While on the first two generations, Renault offered a three-box version for the Megane range, starting with 2009 the French carmaker took a different approach.
The Megane was already a successful nameplate on the European market, and the Sedan version was still sold in high volumes. Then, the company’s management decided to make a bold move and offered a three-box Megane with a new nameplate: Fluence. The result was a disaster.

Fluence was built mostly for car-fleets and rental companies. It offered adequate features and a low price. But it wasn’t exactly the Megane, even though it shared its platform with it. Renault made it with a new front fascia which resembled the hatchback, but it wasn’t the same. Its rounded lines looked rather bland, while the profile followed the same boring style. Since the car was built on Renault’s factory from Bursa – Turkey, it tried to get parts from local suppliers. As a result, many parts were different than those fitted in the French-built Megane.

Inside, there was a fabric upholstery made to last any stains. It looked like the one found in a rental car. The instrument cluster featured large dials for the tachometer and speedometer, but it wasn’t available with the digital display offered on the hatchback range. Since it shared the same wheelbase as the station wagon version, the Fluence offered more room in the back than the regular Megane. And that was its best-selling argument.

Under the hood, it was available with a 1.6-liter gasoline unit and a 1.5-liter turbo-diesel, both paired to a manual gearbox for the European versions. For specific markets, Renault included a 2.0-liter naturally aspirated or turbocharged version.