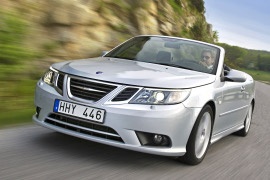 The 2009 9-3 series expands the trim levels while dropping the limited-edition Turbo X sedan and wagon from the lineup.
The 2.0T and some of the Aero models are now available with Saab’s all-wheel drive(XWD). The new Saab 9-3 is virtually unchanged from the 2008 model, which underwent many design and performance enhancements. During 2009 the 9-3X was launched at the Geneva auto show. The 9-3X is a four wheel drive XUV version of the 9-3 SportCombi.The Saab 9-3 is available with four-door saloon body (Sport Sedan), family (Sport Hatch) and cabriolet (convertible). 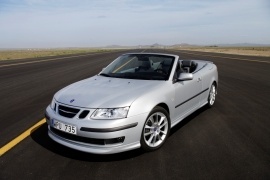 The 2003 edition of Saab’s 9-3 Aero Convertible is an upgraded model of the 1999 release which came now with an improved and more modern look.
The whole body kit has been redesigned although the first things you notice at the new car are the front bumper and the headlights. Similar to the 1999 model, this new Aero Convertible comes with a single engine option, a 2.8 V6 engine which produces no less than 250 horsepower. The car is able to reach a maximum speed of 230 km/h with a 0 to 100 acceleration in 7.1 seconds, while the model still benefits of all the advanced safety features Saab deployed in upper trim level cars of the time. 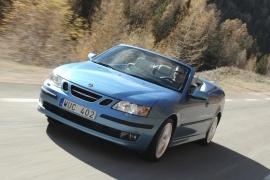 The 2003 model of the Saab 9-3 is, just like the 4-door sedan and the 4-door station wagon, the first member of the second generation of the car introduced by Saab in 1998.
The new Convertible comes with a brand new look, improved by the new front bumper and by the reshaped headlights. The safety features are again top-class as they include the high-end Saab Active Head Restraints technology. In contrast to the first generation of convertibles which was assembled in Finland at the Uusikaupunki plant, the 2003 models are produced in Austria at Graz in a factory owned by Magna Steyr. 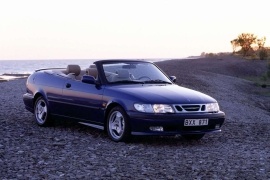 Saab used its former 900 Convertible underpinnings when it made the 9-3 Convertible since GM owned them for barely a year before the car was unveiled.
The Swedish carmaker was a surprising star in the open-top vehicles market since it was not a warm country. Despite all odds, Saab managed to create a different convertible, and its customers were happy with that unique look and feel. GM tried to make the brand more profitable and understood that the open-top version was a good deal, so it gives them the green light.

At the front, the Saab-specific headlights with their swept design flanked the aero-inspired grille. Its front bumper sported a wider central grille on the lower side, flanked by fog lights. The raked windshield and the thick A-pillars were the only body elements that raised over the ascending beltline. Unlike other convertibles on the market, the 9-3 featured a high trunk, and the carmaker built the car, so in the event of a roll-over accident, the occupants’ heads wouldn’t touch the ground.

For the interior, Saab 9-3 featured the main company’s characteristics such as the starter key between the seats, a big center console, and the “Night Panel” function that shut down all the unnecessary information during the night and let only the speedometer lit. Since the carmaker had to push the rear seats slightly forward to make room for the retractable roof, the legroom for the rear passengers was very minimal.

Under the hood, Saab installed its own designed 2.0-liter turbocharged engine. The carmaker offered it with either a five-speed manual or a four-speed automatic. 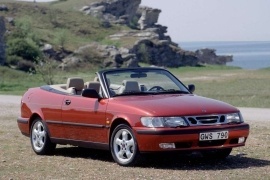 The Saab 9-3 range was introduced in 1998 as a successor of the 900 series.
It was offered as a hatchback, a coupe, and a convertible. It was developed and produced under GM management.

Even if there are not so many days to drive with the top down in Sweden, the Swedish company built convertibles since its first model, the 92 (1952), which featured a textile roof (also known as cabrio-coach vehicles). Unlike its ancestors, the 9-3 was a true convertible.

The 9-3 featured the same front design as its coupe sibling, but it didn’t have the sloped trunk-lid or, at least, not as obvious. Since the car shared its platform with the Opel/Vauxhall Vectra, it had to use some of its components. The wide headlights and the specific trapezoidal grille decorated the front fascia. The raked A-pillars were thick and served as a safety roll-over protection. With its ascending beltline, the engineers stated that if the car was upside down, the occupants had a big chance to survive if the seatbelts were used. Saab was the first car-maker to fit that safety device in the world and gave the rights to use it for free to all car-makers.

Inside, the Saab tried to compete with the premium vehicles. Its dashboard was big and the center stack took its inspiration from the aircraft industry. A “Night Panel” function was carried-over from its bigger brother, the 9-5. Once activated, the entire instrument panel was shut down and left only the speedometer lit.

For the engine-compartment, the 9-3 Convertible was offered with a wide choice of gasoline engines, most of them being turbocharged. The standard transmission for the entire range was a 5-speed manual while a 4-speed automatic was available.