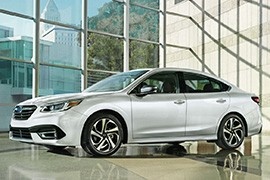 With a successful lineage behind it, the seventh generation of the Subaru Legacy was unveiled at the 2019 Chicago Auto Show as a 2020 model.
Switching to the Subaru Global Platform (SGP), the new model is mechanically different in almost every respect compared to its predecessor, despite featuring a very similar exterior design.

The more modern architecture allows the Legacy to offer much increased torsional rigidity, safety, dynamics and reduced noise, vibration and harshness (NVH) levels, not to mention much improved driving assist technologies. Available under the XT designation, an all-new turbocharged engine marks the reintroduction of turbos in the Legacy range.

The 2.4-liter four-cylinder Boxer gasoline engine delivers no less than 260 horsepower and 277 lb-ft of torque, replacing the aging naturally aspirated 3.6-liter six-cylinder from its predecessor. In fact, the U.S. version of the new Legacy only has a two-engine lineup, with the new turbocharged being accompanied by a naturally aspirated 2.5-liter four-cylinder Boxer with 182 horsepower and 176 lb-ft of torque.

Both engine versions are paired with a Lineartronic Continuously Variable Transmission (CVT) and send their power to both axles thanks to Subaru’s Symmetrical All-wheel Drive with Active Torque Vectoring.

The interior highlight is represented by a table-style 11.6-inch full HD multimedia touchscreen display, which offers controls for the air conditioning, multimedia and vehicle settings. The overall ambience inside is a lot more upscale and there is even in-car Wi-Fi connectivity available for the first time in a Legacy. 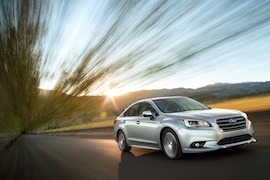 Subaru Legacy was the only mid-size sedan that was offered as standard with an all-wheel-drive system, regardless of the trim level or the engine choice.
And the 2014 model made no exception.

Subaru chose to replace its flagship model, the Legacy, more often than the regular 8-years or more used for other car-makers. That is why the 2015 model, launched in 2014, was the seventh generation of a car that was unveiled for the first time in 1989. In the beginning, the Legacy was developed also as a rally car, but its smaller brother, the Impreza, was better on that game and remained the key member in the WRC program.

The 2015 Legacy was still a sport sedan, with a performance-oriented everything. The outside styling was sporty, with an aggressive look on its headlights and its big grille surrounded by a chromed rim. The bumper featured a central air-scoop and side-pods for the fog lights. In the back, a trunk-incorporated lip added a final touch of sportiness.

Inside, the car was outdated from the design point of view even when it was launched on the market. The high-mounted audio system and the bland style was unusual for that year. Other car-makers already featured infotainment units fitted as standard, but not Subaru.

The main advantage of the Legacy was the drivetrain. Its symmetrical all-wheel-drive system ensured a safe journey even under the harshest road conditions on snow, gravel, mud, or ice. The car was offered with two engine choices and a CVT. 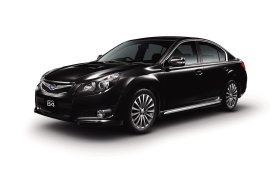 The fifth generation of the Subaru Legacy was unveiled at the 2009 New York Auto Show.
It brought several new technologies for the 20 years model.

The first generation of the Subaru Legacy was launched in 1989 and it surprised the market with its all-wheel-drive and flat-four engine. It was a time when the smaller sibling, the Impreza, was winning races in the World Rally Championship and the Legacy success was based upon those winnings and its qualities.

One of the main features of the Legacy was the frameless side windows that were traditional for Subaru. The fifth-generation had to put frames to increase the car’s safety to the newer standards. Its headlights were no longer slim but big and extended over the hood and fenders. The grille was bigger than before, with a chromed surrounding and the silver wings that sustained the oval badge.

Inside, thanks to a big 17051 mm (108.3”) wheelbase, it offered enough legroom for the rear passengers. The interior design was simple, with black and silver colors, that looked better than before. For the driver’s comfort, the Legacy featured a dash-mounted parking brake and hill-holder. The later was a first in its class.

For the technical department, the Legacy featured the same symmetrical all-wheel-drive system, with flat-four or flat-six engines. The former was available in naturally aspirated or turbocharged versions. For the transmission, the four-cylinder units were mated to a standard 6-speed manual, while a CVT was available for naturally aspirated versions. The 6-cylinder came with a 5-speed automatic. 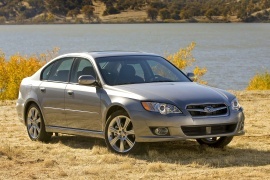 Subaru made a final facelift for the Legacy in 2008, which introduced new engines and slightly different exterior details.
In 2007, the world was crumbled in a financial crisis, and the automotive industry took a bad hit. Subaru tried to dodge the bullet and postponed the launch of the Legacy’s fifth generation. It chose to refresh the fourth generation instead, and for some reason, that was the smart thing to do. But it wasn’t easy. The carmaker still had to improve the engines.

The most efficient way to make a facelift is to reshape the bumpers and the headlights. Subaru went a little bit more over that and included new front fenders and new alloy wheels. There was nothing extraordinary, but the car offered a better, sportier look. The wider grille in the lower side of the bumper featured an aggressive styling inspired by the world of rallying.

Inside, there was the same layout from the non-facelifted version. The Legacy was available with a sat-nav infotainment system mounted on the sloped center stack. The dashboard used the same materials and the same color, regardless of the rest of the cabin’s upholstery.

Subaru made a big improvement for the engine and the drivetrain. It introduced the 3.0-liter flat-six engine that complied with the new emissions regulations. Its re-worked 2.5-liter flat-four was good even for California’s pollution norms. In Europe, Subaru brought the Euro 5 engines and, since the Europeans were mad about oil-burners, it introduced a 2.0-liter flat-four turbodiesel. 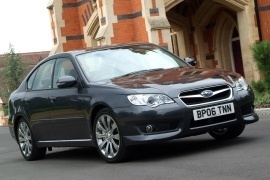 The 2006 edition of Subaru Legacy is described as the most popular model in the Legacy range, both the sedan and the wagon flavors recording impressive sales.
Moreover, it is said that no less than two-thirds of the Legacy buyers opted for wagons which provide a more spacious interior than the sedan. However. the two body configurations are both equipped with the 2.5i engine which was also installed on the previous models but is now able to provide 175 horsepower. In addition, the new Legacy has several last-generation safety features, including dual-stage frontal airbags, ABS, EBD, active head restraints and side-impact airbags. 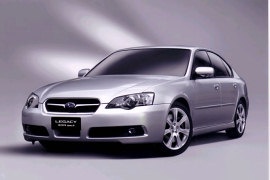 Subaru launched the Legacy’s fourth generation in 2003 and won the Japan Car of The Year Award in front of the Toyota Prius and Mazda RX8.
Fuji Heavy Industries owned the Subaru brand, and this time it paid more attention to the design department. As a result, unlike other cars from its stables, the Legacy B4 finally had a shape that could stand beside other carmakers. Traditionally, it remained with its all-wheel-drive system and the flat-four engine.

Before the 2003 Legacy, there were just a few who liked Subaru’s design. The Japanese carmaker looked like it paid high money for the engineers and just lunch money for its design department. But the 2003 Legacy was different. It still kept the frameless doors, but it made an inspired front fascia with sharp, curved headlights. The grille sported the winged badge, while the front bumper featured a broad center air intake with side-mounted fog lights. In addition, Subaru included a third side window between the rear doors and the raked-forward C-pillars at the back.

Inside, the low seating position reminded its occupants that they are in a Subaru, not into some old-fashioned box on wheels. Its front bucket-seats provided, depending on the version, high-bolstering. Thanks to its long wheelbase, the Legacy could host two adults in the back and, maybe, a children riding in the middle, over the transmission tunnel.

Under the hood, the carmaker installed either a flat-four or a flat-six engine with either 2.0-liter or 3.0-liter displacement. Subaru paired them with manual or automatic transmissions, depending on the market and the customers’ specifications. But they all had one thing in common: the symmetrical all-wheel-drive system that made Subaru famous. 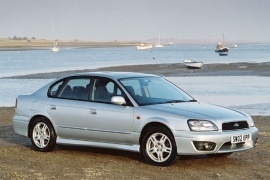 The 2002 Subaru Legacy is a redesigned edition of the 1999 release which is now powered by Subaru’s 2.5 liter engine that could developed 165 horsepower. If the 5-speed manual transmission comes as standard on all versions, the automatic gearbox is only available as an option. However, the standard and the optional features vary from a model to another. For example, the L models have ABS, air conditioning and power windows while the GTs come with bigger wheels, sport suspension and bigger front brakes. In addition, the limited version of the car had side-impact airbags and CD player. 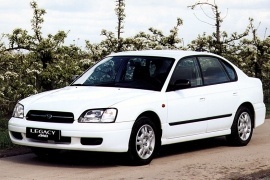 After just six years on the market for its predecessor, the third generation of the Legacy came in a hurry and featured the standard all-wheel-drive for the entire range.
Subaru was already a known and respected name among the car enthusiasts, especially those watching the World Rally Championship. The Legacy was the car to drive with your family in complete confidence on a slippery road. Besides, it offered a comfortable ride with its independent suspension in all corners.

The carmaker improved the car’s design, understanding that a good look will help a car sells better. Even though it wasn’t everyone’s vanilla, it showed that it tried to make it better. The bigger headlights and taller grille offered a better stance for the Japanese all-wheel-drive sedan. Depending on the version, the car featured a functional scoop on the hood, needed to get more air into the turbocharged engine. Its frameless windows were still unique on the market and a plus for the carmaker design department.

Inside, the Japanese carmaker offered premium-segment details such as automatic climate control, leather seats, and plenty of room for five, despite the transmission tunnel that crossed the vehicle from front to back. Subaru asked the designers to install low seats to help in the corners with a lowered gravity center. For a good impression on long trips, the carmaker included a 6-CD changer as standard on the upper trim levels.

Subaru installed a boxer engine under the hood mated to either a 5-speed manual or a four-speed automatic. A flat-six engine with a 3.0-liter displacement was available on selected markets only, and so was with the turbocharged 2.0-liter version.