Suzuki and Toyota were not at their first car built together, but the 2020 Suzuki Swace was a badge engineering between the two brands.
It is hard to look at the Suzuki Swace and not recognize the Toyota Corolla Touring Sports (station-wagon). While it might sound redundant to offer the same car with different badges, it made sense. It helped Suzuki to increase its market share in the car-market, with a model proven for its reliability and, since it was a hybrid, to lower its manufacturer’s emissions as well.

The front fascia showed a deeply sculptured bumper with various designs for the lower apron and deep side-scoops. Visually, it featured a huge center grille, like a shark mouth. It was smaller than it looked since the middle segment was painted in black. The narrow LED headlights were carried-over from the Corolla, but the small grille and the badge on the hood were specific to Suzuki. In the back, apart from the Suzuki logo on the tailgate, the rest of the car was a Corolla, with the same sculptured shape for the bumper and hidden exhaust tip under the apron.

The interior featured a black dashboard with an 8” touch-screen infotainment display on top of the center stack. It was Apple CarPlay and Android Auto compatible. The instrument cluster featured three dials: the tachometer, the centrally-mounted speedometer, and the fuel gauge on the right side. There was no coolant temperature gauge.

For the drivetrain, the Swace featured the same hybrid system as the Corolla, with a 1.8-liter gasoline engine and an electric motor, both paired to a CVT. The system was proven to be very fuel-efficient in the Prius as well. 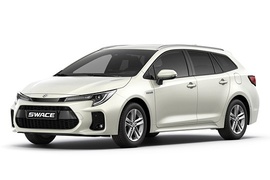