Tata unveiled the Indigo in 2002, and it was based on the same platform as the Indica, a subcompact hatchback.
The station wagon version became available in 2004.

Tata Motors was part of one of the biggest companies in India, Tata Group. The Indica was designed to be an affordable vehicle for the masses and soon became very popular. It was a young carmaker since its first passenger vehicle was introduced in 1988 and also was the first Indian company that developed a car from scratch, the Telcoline pickup.

The Indian carmaker used a stretched version of the Indigo platform to create the Indica in 2002. It featured modern headlights with incorporated turn-signals on top and clear lenses. The short hood and raked windshield made the vehicle very good in congested traffic. Unlike its sedan sibling, the Indigo SW featured a longer cabin with a roofline extended over the luggage compartment and an additional window behind the rear doors.

Inside, it provided enough room for five adult passengers, but with limited legroom for the rear ones. Its dashboard featured a storage area on top and another one under the steering column. The instrument cluster featured two large dials for the tachometer and speedometer and, inside them, the gauges for the fuel level and coolant temperature. Since it was a station wagon, the carmaker installed a folding seatback for the bench, enlarging the trunk area. It was not a split-folding type but a one-piece system.

Tata installed two engine options under the Indigo’s hood: 1.4-liter gasoline and a very fuel-efficient 1.4-liter turbodiesel. Both were paired to a five-speed manual gearbox. 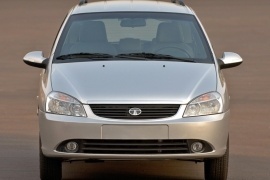