The biggest Highlander ever made by Toyota made its world debut at the 2019 New York Auto Show, promising gas and hybrid versions into the upcoming year.
But the most important thing is that the unibody SUV is built on a completely new platform.

The new platform, called TNGA-K (Toyota New Global Architecture) allows multiple choices of engines, gearboxes and bodyworks. It will have four trim levels: LE, XLE, Limited and the top of the line Platinum. Customers can choose between 5 or 7 seats on most of the versions.

On the inside, Toyota kept their promise of introducing a new 12.3” touch-screen for the top Platinum trim and 8” for the other. As expected, all the infotainment systems are supporting Apple CarPlay and Android Auto. The rear doors are wide enough to ensure a comfortable entry for the passengers on the third row.

Under the hood, Toyota installed the well-known 3.5-liter direct gas injection V6 engine with 295 HP. For the hybrid version, the Japanese engineers installed a four cylinder 2.5-liter unit and two electric motors. Unlike before, Toyota installed these motors transaxle on the rear, with a parallel design. The result is a more efficient system, especially from the economy point of view. 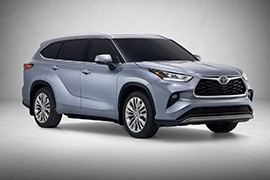