Toyota tried to introduce a cheaper sub-brand under its umbrella, the Scion.
Still, soon after, it died killed by the 2008 world economic crisis’s after-effects.

The Scion xB was not very successful on the market, but since it used the same platform as the Toyota Corolla/Auris, it was easy to build by the Japanese carmaker. In 2007, due to high demands for spacious, but small, hatchbacks on several markets, it introduced the Rukus.

Basically, the Rukus was a re-badged Scion xB with a different front bumper, hood, and badge. The high-roof, boxy, appearance was needed to offer enough interior room. In the back, the flat and vertical tailgate was cut around the taillights.

Since the car featured a short wheelbase, the designers had to put higher seats for all passengers to provide enough legroom and headroom. The dashboard was flat and narrow, with the instrument cluster placed in the middle. Their design mimicked an inline-four engine, with separate clusters for the dials and the digital speedometer. The car featured an infotainment unit with a sat-nav system that was installed above the center stack, closer to the passenger than to the driver.

Toyota installed a 2.4-liter, naturally aspirated engine under the Rukus’s hood. It was paired as standard to a 4-speed automatic gearbox that sent the power to the front wheels. It was the only option available. 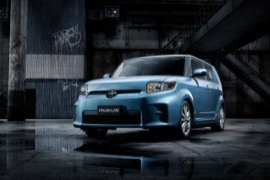