In Europe, it was called Opel Astra and in China, it was Buick Excelle XT.
The seventh generation of the Astra was launched in 2014 and, in 2018, a mid-life cycle refresh was introduced.

A quarter of British drivers had or drove a Vauxhall Astra in their life. That is huge and it shows the success of the German compact vehicle. The 2018 facelift was introduced to support the sales figures of the high-selling vehicle, on a market highly contested by most of the car manufacturers.

GM wanted to do a more efficient Astra. To do this with the lowest possible costs, it put the car into the wind tunnel and adjusted what it could be adjusted and dropped the drag coefficient to a stunning Cx of 0.26. That was better than 90% of the cars on the market at that time. In the late ’80s, that was a world record and it was obtained by another Vauxhall/Opel, the Calibra. Revisions to the bodywork the grille that had shutters.

For the engine bay, there were new, three-cylinder units of 1.2- and 1.5-liter displacement. The former was gasoline and the latter was a turbodiesel. The most powerful version was the 1.4-liter turbocharged that offered 145 hp and it was mated with an optionally 9-speed automatic gearbox. 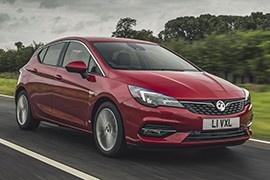