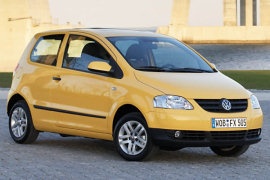 Volkswagen introduced the Fox lineup in 2003, primarily for South America, and developed it in Brazil, but in 2005 it launched it in Europe.
Back in 2005, Volkswagen didn’t have a cheap econobox for the European market to compete against the French and Italian cars from that segment. Then, the carmaker’s management came with the idea of introducing the Fox in the three-door version and competed against Renault Twingo, Peugeot 107, and Fiat Seicento.

The Fox featured big headlights and a three-slat grille with a front fascia that looked more appropriate on a compact-segment vehicle. Its bumper was also tall and sported a black lower area to create an illusion that it was smaller. Well, it wasn’t. On its sides, the Fox revealed a tall greenhouse and oversized door panels. At the back, the tailgate was almost vertical with just a slight tilted-forward rear windscreen.

But the Fox impressed with its spacious interior. Thanks to its tall cabin, the carmaker could install the seats higher. Thus, it provided more legroom for the rear passengers without compromising the headroom either. Its simple instrument panel resembled the one installed on the famous VW Beetle, with a large speedometer flanked by gauges and dials. The Fox was just an econobox with cranked windows on the base trim level, but the carmaker offered power windows, an AC unit, and a CD stereo on the higher trim levels. In addition, the rear windows featured a pop-out system to help to ventilate the cabin.

Under the hood, VW installed a choice of three engines, including a 1.4-liter turbo-diesel which was highly fuel-efficient.