Volkswagen introduced the facelifted version for the CrossGolf at the 2010 Geneva Motor Show and upgraded the car to Euro 5 standards.
With an increased demand for crossovers and SUVs on the market, Volkswagen couldn’t stay put and not showing anything. Yet, it was not completely ready with a new vehicle range and had to rely on existing projects.

The CrossGolf was a lifted version of the Golf Plus, an MPV built on top of the well-known compact hatchback. Volkswagen revised the car’s front fascia, where the carmaker introduced the “Design DNA” concept with horizontal lines over the grille reflected into the horizontal form of the bumper. The mirror caps were painted in silver, as on any other Cross model from Volkswagen.

Inside, the carmaker built the CrossGolf as a minivan, and thus it offered plenty of space. Volkswagen installed, specific for the CrossGolf, doorstep inserts with an aluminum-look on the front doors. The headroom was more than enough even for tall people and, due to the raised seating position, the car was roomy enough even for the rear passengers. All these resulted due to the vehicle’s tall greenhouse. Last but not least, a large trunk could accommodate up to 1,450 liters (51.2 cu-ft) of luggage with the rear, split-folding seats out of the way.

Along with the facelift, Volkswagen introduced the Euro 5 engines for the CrossGolf in both versions: gasoline or turbodiesel. Apart from a 1.6-liter bi-fuel option (gasoline and CNG) mainly for fleet usage, all other engines were turbocharged. A new automatic (dual-clutch) gearbox was available at extra cost for specific engine versions, while the classic, six-speed automatic transmission as an option exclusively for the 2.0-liter TDI powerplant. 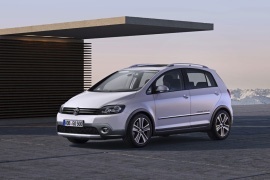