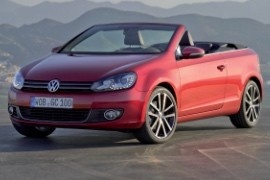 No, the 2015 Volkswagen Golf Cabrio is not a new model, but an enhanced version of the previous one.
And we’re not even talking about aesthetic improvements but mechanical ones. The automakers played a bit with the trim levels and also revised the engine range. New for the interior are the latest generation of radio/infotainment systems Composition Colour and Composition Media, featuring large color touchscreens and 8 speakers. Discover Media is available, allowing Bluetooth pairing, and navigation updates are are free for the first three years. The revised engine range offers a 15 percent better fuel economy. 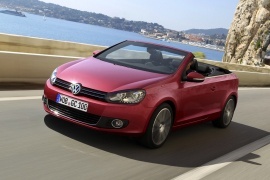 The cabriolet body style came back after 9 years of absence.
In 2011 the Golf VI cabriolet was unveiled to the public at the Geneva Auto Show.

While the Volkswagen range already offered a cabriolet, the EOS, the Golf VI was smaller and cheaper.

Usually, removing a car’s roof means compromising handling, however, the Golf VI was almost as good to drive as the hatchback version.

With a varied choice of gasoline and diesel engines, the cabriolet was impressively refined. Wind noise could be heard at higher speeds, but it was not excessive with the windows up and the wind deflector in place.

The roof would fold up or down by the press of a button and could be operator up to a speed of 30 km/h.

The Golf VI cabrio was a proper 4-seater, with great room for the passengers in the back, thus longer journeys were not an issue.

The trunk was decently sized and the cargo area could be expanded by folding the rear seats.

Inside, the cabin was classy and easy to live with, nothing luxurious, but with controls intuitively placed and easy to use.

Even if the Golf VI convertible shared many of its under pinnings with the Audi A3, the latter was also its biggest rival on the market. 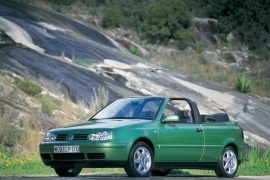 Volkswagen offered an open-top version for the Golf IV range, but there was a trick; it was actually a Golf III with Golf IV headlights.
The German carmaker introduced the Golf IV in August 1997 as a 3- and 5-door hatchback. In 1998, it introduced the station-wagon. But something was missing: the convertible. There was no gain in building a new vehicle from some points of view, so VW decided to do a trick: it took the Golf III Cabriolet and transformed it into a Golf IV Cabriolet. Something like having a non-facelifted model and changing the bumpers and headlights to look like the facelifted version.

Its headlights were clearly carried-over from the MK IV version, with four lamps inside each headlight. Most of the front body panels were taken or adapted to the new look. But, viewed from its sides, the car revealed its true origins, the MK III version. A thick B-pillar was planted behind the doors, with a safety-arch crossing the car from left to right side. In the back, the canvas-top was exposed behind the rear bench when it was folded.

Inside, the carmaker installed exactly the same dashboard as in the Golf III range, with a driver-oriented center stack. The Golf IV Cabriolet offered just cranked windows, no AC, and no stereo on the entry-level. The upper trim levels featured power-windows, a good sound system, and automatic transmission.

Under the hood, Volkswagen installed some of the engines which were available on the Golf III. With a choice of gasoline and diesel units, the Golf IV Cabriolet was an appealing vehicle in its class. 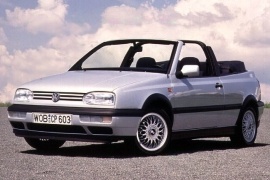 The Golf III Cabrio shared the same front side as the hatchback version. Due to its rounded, but not round, headlights, and curved edges, the third generation of the famous compact-segment Volkswagen was completely different than its predecessor. A raked windshield and a safety bar in the middle of the cabin made the car unmistakable on the road. The canvas top could have been removed manually and stored behind the rear seats.

Due to the driver-oriented center stack, the Golf III offered a sportier feeling than its predecessors. The dashboard was available either in one color or in a two-tone scheme that inspired a premium look. The Golf III Cabriolet offered just cranked windows, no AC, and no stereo on the entry-level. The upper trim levels featured power-windows, a good sound system, and automatic transmission.

Volkswagen installed a choice of gasoline and diesel engines. For the European market, the base version was powered by a 1.4-liter four-pot, while the top version featured a 2.0-liter unit.