The fastest green Golf was launched at the same moment with its siblings running on gasoline or diesel.
The GTE version is a mix of gasoline and electricity, with the same power as the GTI but less noisy and more ecological.

Maybe the 2020 GTI generation will be the last performance hot-hatch gasoline from Volkswagen. The connection with the cult-car is made via the GTE: a greener, more efficient and economical vehicle. There are some differences on the outside between the GTI and GTE.

First of all, the red-thin line that spans across the front grille toward the hood and sides on the GTI is blue for the GTE. Maybe VW saved the “green” line for a future all-electric hot-hatch. To emphasize that the plug-in is more environmentally friendly, the GTE doesn’t have any exhaust pipes visible on the rear, while the GTI and GTD each show two pipes.

The plug-in hybrid drive of the Golf GTE comprises of a 1.4-liter TSI (turbo gasoline direct injected) engine and an electric motor. The total output power leads to 245 hp, the same as for the GTI, but with bigger torque. The GTE has 400 Nm (295 lb.-ft), while the GTI has 370 Nm (272 lb.ft). Transmission is made via a 6-speed DSG (double-clutch) gearbox. 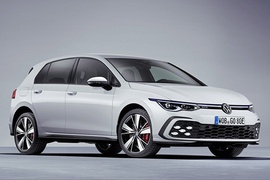