The Golf R reached its fifth generation and all offered sports car performances, with all-wheel-drive traction and aggressive look.
Volkswagen was considered the inventor of the hot-hatch category when it introduced the first generation of the Golf GTI. It was a segment that grew and, soon, other carmakers produced various performance vehicles in the segment. The Golf evolved and offered more and more performances, but they were no longer the kings of the hot-hatches despite their efforts. Honda, Ford, Renault, and Opel/Vauxhall, made a fierce competition. But the Golf R returned to fix that.

A hot-hatch doesn’t have to look just as regular as the rest of the range. While on older models, there were just a few aesthetic differences, the Golf R went all the way. The taller bumper with huge grilles on the lower side and big side-pods made a perfect match for a car that had to look fierce. The new, slim headlights with an upper LED daytime running light strip made the vehicle looks mean. On the sides, there was a new aerodynamic package with side sills and a bigger rear roof-spoiler. In the back, the four exhausts were shown under the bumper, next to the splitter.

Such an aggressive look couldn’t be complete without a race-inspired interior. The sport-bucket seats with integrated headrests for the front passengers were high-bolstered to keep their occupants in place while hard-cornering. The full-digital instrument cluster and the paddle-shifters behind the steering wheel made the car looks business.

For the drivetrain, Volkswagen installed a turbocharged inline-four gasoline engine. It was paired to either a 6-speed manual or a 7-speed DSG (dual-clutch) automatic transmission. Power went to all corners via a newly developed all-wheel-drive system with torque vectoring. 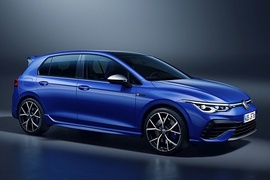