With a market dominated by crossovers and SUVs, making a convertible version for such a vehicle was an unusual approach, and yet, Volkswagen dared to build and offer the T-Roc as a convertible as well.
Even though the convertible accounted for a small fraction of the T-Roc’s sales, the carmaker decided to go on with it and kept it on the assembly lines. After all, it was the only crossover convertible on the market, and Volkswagen didn’t want to let that advantage go.

For the facelifted version, the T-Roc received a similar treatment as its stablemates. Yet, there were a few details that made it special, apart from the folding fabric roof. For instance, the front fascia was similar to the regular T-Roc, but at the back, the trunk lid received a lip spoiler. It wasn’t there for a specific aerodynamic advantage but for the vehicle’s overall look.

For the passenger area, the carmaker used the same dashboard with an 8” infotainment screen atop the center stack and an option for a 9.2” unit. In front of the driver, Volkswagen replaced the older analog dials with an 8” TFT display named Digital Cockpit. A 10.25” screen dubbed Digital Cockpit Pro was on the options list. As for the seats, they did look somehow like those from the five-door version, but they were folding and provided more side support even on the standard version. Behind the cabin, the carmaker installed the retractable roof compartment. That pushed the rear bench forward, leading to smaller legroom than on the regular T-Roc.

Under the hood, the German carmaker offered the T-Roc with a choice of two engines paired with either a six-speed manual or a seven-speed automatic (dual-clutch) gearbox. 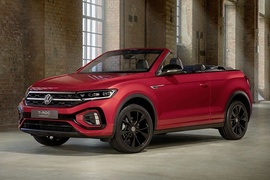