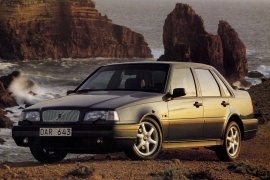 In the late ’80s, Volvo started to switch its production to the front-wheel drive system instead of rear-wheel drive ones.
The 460 was one of the good results.

The car was based on the same platform with the sporty hatchback Volvo 480. The compact market already started to be very important and Volvo had the idea to offer a premium car for that segment and it launched the 440 in 1987. It was a car for families and young couples.

While the 440 featured a hatchback bodywork, the 460 was offered as a four-door sedan. It also was a time when Volvo started to change its design trend from straight cut lines to curvy forms. The 1993 460 featured restyled headlights when compared to those of the 1987 440. The front side resembled its bigger brother, the Volvo 850, which was launched in 1990. From the side, the 460 featured a small window behind the rear doors, as an element of distinction.

Inside, the 460 still used the same square design. The instrument cluster and the center stack were combined into a big, square, element with the air-vents and the tape-radio. The car featured a roomy interior, despite its short length. It was good for transporting up to five adults, but on short distances, but four of them could fit well inside the 460. The most important upgrade for the facelifted Volvo 460 was the side protection, where the car-maker installed steel beams inside the doors.

The car was offered with a wide choice of gasoline and diesel engines. Some of them were carried-over from the Renault. The power range was between 83 hp and 120 hp. All versions were mated as standard with a 5-speed manual. 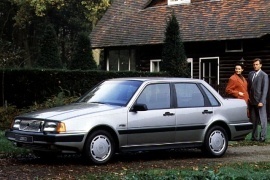 Volvo needed a car to compete in the small-size sedan segment and worked closely with Renault to start the 440/460 series.
At the beginning of the ’80s, Volvo started to look for a partner and develop a new vehicle lineup. Its rear-wheel-drive vehicles started to be outdated and outperformed. In the end, it signed a deal with Renault, created a new platform, and introduced the 1987 Volvo 440 hatchback on the market. Two years later, the Swedish carmaker launched the sedan version, which was named 460.

The design language of the 460 was very similar to the one offered by its sibling, the 440. Its front fascia resembled the 740/760 series but shrunk to fit. By those times standards, it was considered a compact-sized vehicle. Volvo’s design team made the three-box sedan with shorter side windows behind the rear doors than those from the 440 and a less raked C-pillar.

Inside, the change toward a front-wheel-drive platform led to a more interior room for the front passengers, but the limited wheelbase made things more difficult for the rear ones who didn’t have too much legroom. Still, it was considered a premium compact-segment sedan fit for a family looking for a more luxurious car.

Under the hood, the Swedish carmaker installed Renault engines paired to a standard 5-speed manual gearbox. A four-speed automatic transmission was offered as an option, while Volvo developed and installed a CVT on later versions.