While BMW introduced the first 8-Series GT and the Alfa Romeo stunned the world with the SZ lines, a small company named Zender revealed a supercar concept: the Fact 4.
Zender evolved from being a small German tuner to a prototype-builder. It tried to get more attention from the Volkswagen Group and focused on VW platforms or engines to build new cars. The Fact 4 was decades ahead of the Audi R8 yet, it showed the German carmaker what it could do with the technology it already has, but it was too soon, and the project died.

When Günter Zillner designed the Fact 4, he was inspired by supercars and placed the engine in the middle. He developed a unique carbon-fiber monocoque helped by Zender’s engineering team, which was an unusual and underrated material for those times. He didn’t fell for the pop-up headlights and installed regular, squared-looking headlamps flush with the slanted front lid. A simple yet efficient air dam with integrated grilles on the lower side of the bumper and a splitter completed the front fascia. The greenhouse started with a very raked windshield and a short roof, continued at the back by a long sloped engine lid with horizontal vents and a big wing in the back. From behind, the car looked like the designer took its inspiration from the Ferrari F40, which appeared in 1987, with slim vertical taillights mounted only on the edge of the rear quarter panels.

Inside, the cramped interior was just for two occupants, with a large center console between the sport bucket seats with high bolstering. Its instrument cluster carried over dials and gauges from the Audi lineup, the vents, and the climate control unit.

The powerplant was a 3.6-liter V-8 engine carried over from Audi but enhanced by Zender with a pair of turbochargers that raised the power to 448 hp, thirty less than Ferrari F40 and just 0.2 seconds slower than the Italian supercar. 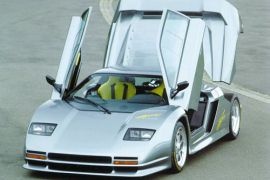